A Sunrise, a Sword and a Sweeping Away

Greetings in the precious Name of Jesus!

I am still preparing a message on what I feel the Lord is saying for this year 5778 and want to make sure I hear and see the whole context clearly before sending it out. However, on Sunday I had the privilege of participating in an amazing worship meeting and the Spirit gave me a number of images in the spirit with messages attached. I would like to share three with you and pray they may encourage you;

1) I saw a figure worshipping with arms raised, facing the sun which was coming over the horizon in full strength. There were two figures standing with this person, one behind each shoulder. They were dressed in ash-grey robes and I knew somehow that they had journeyed with this person for a long time. As the person continued to worship with all their heart, the two figures in grey began to cower and draw back and finally, they could no longer bear being anywhere near this scene of such wholehearted worship and they ran away. The Lord told me the names of these two figures were Sorrow and Sighing. Saints, worship the rising Son of Righteousness with all your heart and soul and mind and strength at this time, no matter how dark or sad your journey has been. He is coming with healing in His wings. Focus on Him alone and do not turn to look back at the sadness of the valley you have journeyed through. As you do so, the light and joy emanating from a vessel wholly filled with the praises of God will repel all darkness that has accompanied your steps and you will enter a new day filled with the light of the Sun of Righteousness. The Lord reminded me of a scripture concerning this unfolding scene of deliverance:

And the ransomed of the Lord shall return and come to Zion with singing, and everlasting joy shall be upon their heads; they shall obtain joy and gladness, and sorrow and sighing shall flee away.

[The Lord God says] And the redeemed of the Lord shall return and come with singing to Zion; everlasting joy shall be upon their heads. They shall obtain joy and gladness, and sorrow and sighing shall flee away.

…and the light of the sun will be sevenfold, like the light of seven days, in the day that the Lord binds up the hurt of His people, and heals their wound. …Isa 30:29 You shall have a song as in the night when a holy feast is kept, and gladness of heart as when one marches in procession with a flute to go to the temple on the mountain of the Lord, to the Rock of Israel.

2) During the worship, I became aware of an intense, unrelenting pressure which someone was experiencing. I did not understand where it was coming from. Then I saw the edge of a sword blade being pressed against a revolving grinding stone as it was sharpened. The Lord said, “Some of My people think they are still in the refiner’s fire because of the intense pressure felt against the unrelenting hard place which they are experiencing. But the fire has completed its function and you, my weapon of war, are fully formed. I sharpen you now in preparation for battle.”

For I have bent Judah for Myself as My bow, filled the bow with Ephraim as My arrow, and will stir up your sons, O Zion, against your sons, O Greece, and will make you as the sword of a mighty man.

Then I saw the scene in Revelation 19 with the sword coming out of the mouth of the One Who is called Faithful and True, and I was given understanding that this sword proceeding from His mouth would speak and decree the Word of God that is sharp to divide between soul and spirit and that this battle would be waged both through writings and the spoken word in live messages and decrees. The sword is kept in its sheath against the thigh of a mighty man until the moment he needs to wield it. But when He knows the battle is about to begin, he prepares His sword accordingly.

And I saw Heaven being opened. And, behold! A white horse, and He sitting on it having been called Faithful and True. And He judges and wars in righteousness.

The intention is to judge and wage war in righteousness, not unrighteousness. Remember the description in Isaiah 11, both of the Lord and ultimately of those who have grown to the full measure of the stature of the fullness of Christ:

But with righteousness and justice shall He judge the poor and decide with fairness for the meek, the poor, and the downtrodden of the earth; and He shall smite the earth and the oppressor with the rod of His mouth, and with the breath of His lips He shall slay the wicked. Isa 11:5 And righteousness shall be the girdle of His waist and faithfulness the girdle of His loins.

Here is the key – judging with righteousness and justice and striking the right target down! It is no use slaying the poor and downtrodden by mistake and causing the oppressor to rejoice that you have strengthened his hand…

A dull sword cannot be used with precision in battle and so He sharpens with intent to use this weapon of war with precision in the days ahead. The sharpening is painful for the sword and it is diminished in measure by the surface against which it is held and pressed, but it is far more effective to deal one swift accurate blow with a razor-sharp sword against the enemy, than it is to hack repeatedly at a target with a blunt blade.

I was also given the impression that the ‘grinding stone’ which the Lord will use may also be the hard heads of other believers in the Body of Christ. Do not be tempted to use your tongue to hack at your brother or sister in Christ when contending over. They are not the enemy. Remember the grinding stone is also one of the Lord’s tools. It is not part of the enemy’s arsenal. You are still in the tool shed or the heavenly Blacksmith’s quarters, being adequately prepared. We wrestle not against flesh and blood and any opportunity to be sharpened in these final preparatory days is in order to deal death blows to the hiding places of the enemy and to decimate his kingdom. Allow the pressing to remove any dull bits in your understanding of the Word and do not be a part of inflicting ‘friendly fire’. A sharp sword wielded by the King of Kings and Lord of Lords will pierce immediately to the heart of the matter. Paul so accurately describes the godly manner of engaging in battle:

24 And the servant of the Lord must not be quarrelsome (fighting and contending). Instead, he must be kindly to everyone and mild-tempered [preserving the bond of peace]; he must be a skilled and suitable teacher, patient and forbearing and willing to suffer wrong. 25 He must correct his opponents with courtesy and gentleness, in the hope that God may grant that they will repent and come to know the Truth [that they will perceive and recognize and become accurately acquainted with and acknowledge it], 26 And that they may come to their senses [and] escape out of the snare of the devil, having been held captive by him, [henceforth] to do His [God’s] will.

Yes, civil war has been prophesied within the Church, and unfortunately it is coming, but make every effort to preserve the bond of peace and allow the One Who wages war in righteousness to use you to set your brethren free through your courtesy and gentle approach in speaking Truth. And at this point, when you are still in the process of being sharpened, receive the reducing at the hand of the grindstone with humility. You are becoming the swift sword of a Mighty Man!

3) I heard the Lord say, “The tide is rising” and I saw the level of the sea rising extremely fast. Then I saw a flooding wave knock over barriers like they were matchsticks and sweep them up in its path forward and He said, “I will sweep away the barriers of unbelief which you have set up to protect yourselves from further pain. You have done this because hope deferred has made your heart sick. But now, Beloved, prepare to be swept away by a flood tide of My love. Prepare to be overwhelmed by lavish displays of My exceedingly powerful love for you.” 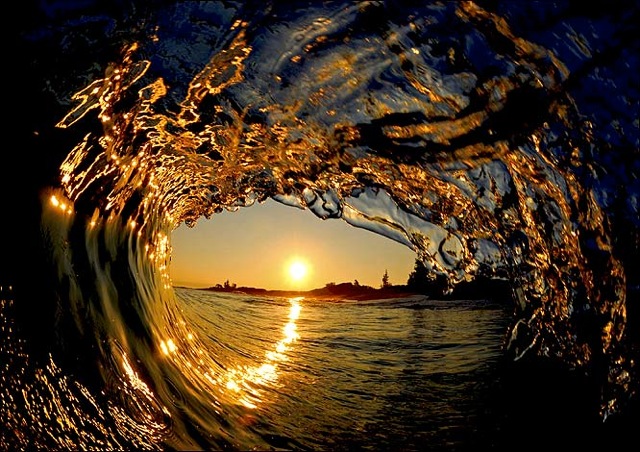 Then I saw the inside of a house and the passageway leading up to the front door and I heard, “Open the door” and the door swung open and a flood tide of foaming sea water barreled into the house and began to fill every room until the level rose to the ceilings. And the Lord said, “Yes, I am coming to your house. Open the door for Me to enter and prepare to be swept away by the greatness of My goodness toward you and yours.” As He said this, I began to feel a strong pressure against my chest, almost as if I was standing in that passageway and being hit by the great force of the wave of love that was penetrating my space. I had the sense that this vast surge of water was connected with the level of waters to swim in the river described in Ezekiel 47:

Afterward he measured a thousand, and it was a river that I could not pass through, for the waters had risen, waters to swim in, a river that could not be passed over or through.

The previous levels speak of a measuring at the ankle, knee and loins. But after this is complete, the rivers that sweep you off your feet and carry you into the fullness of His purposes is here. Open up to Him and prepare to be to be swept away by the floodtide of His healing love. Wherever the river goes, everything lives.

Christ, the Coming One

Maturing Beyond the Feast of Pentecost