Be Part of Heaven’s new Sound 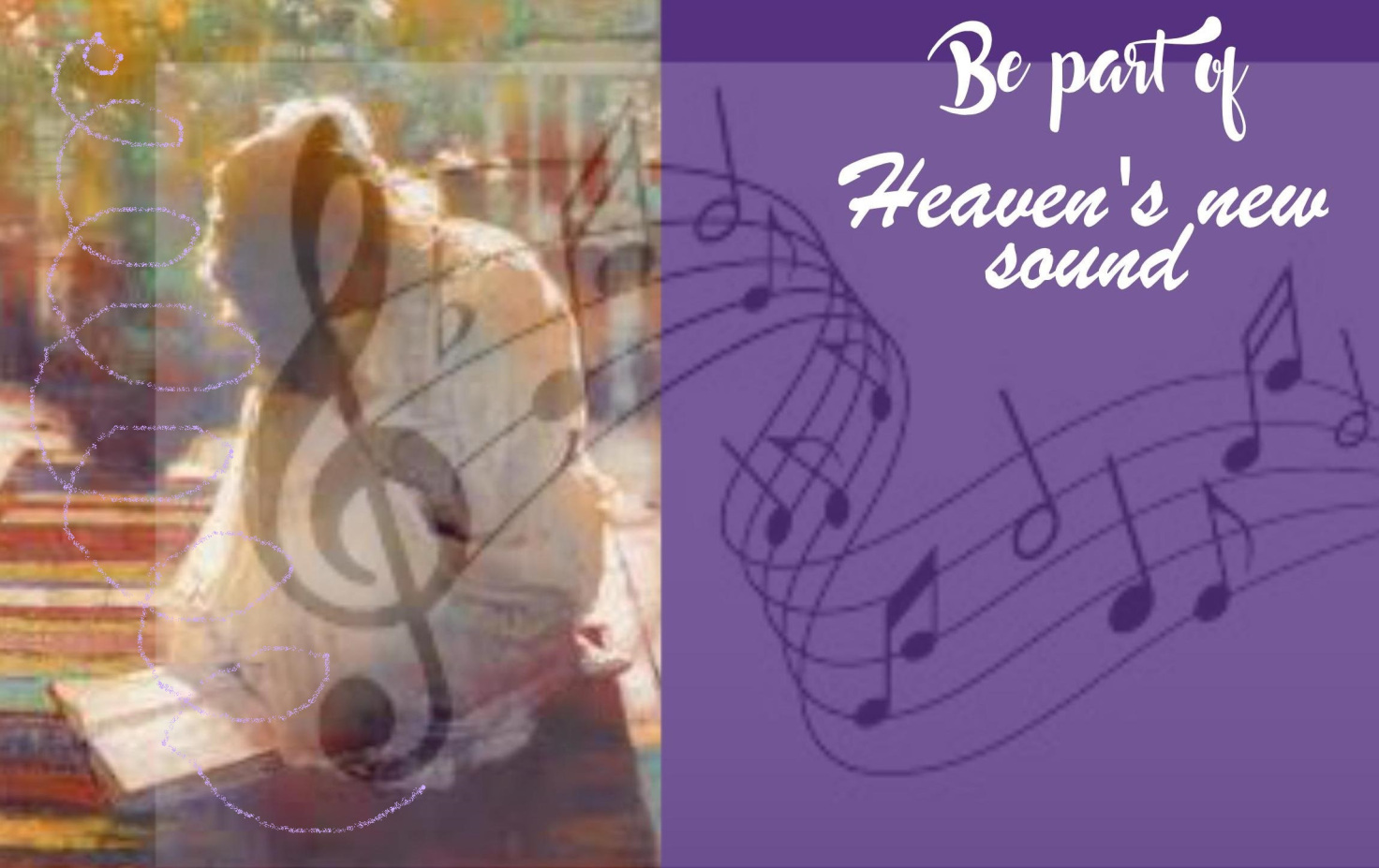 Recently, I was privileged to attend a prophetic gathering of women, and in the open heaven atmosphere created by the worship, I began to see and hear what God was doing. Before me in the spirit, a woman in a white garment with her head covered was sitting and waiting on the Lord. She was facing to the left. Then a wind started blowing strongly round her and whipped her garment into a spiral, as if she was in the center of a tornado, moving anti-clockwise. Then the garment and head covering began to change color starting at the head, from white to indigo and violet and finally purple. Then I saw the skirt of her garment be swirled round to the right and the woman’s figure began to form a treble clef (hard to explain, but it looked like she was becoming the beginning of a sheet of music being written). Then I saw little black musical notes begin to flow out of her to the right. They were flowing around joyously all over the place, but not taking up any position on the lines of the music sheet.

Then I saw some type of hook with four points (in the shape of an X or cross), which I understood was for the purpose of fastening each note in its appointed place in the score, and I heard the following words:

“Anchor me in Your melody

Let me be a part of Heaven’s sound

Blow me into Your symphony

As it sounds and then resounds,

Through this temple that is Yours

Echoes of Your victory

It is done, battle won

I am free, Christ in me,

With the sound of Heaven’s rain

Pour it out and let it flow

Let us feel Your heart again

Wrap this tired, old world around

With the strains of Yahweh sound,

Heaven’s wine poured out for all

Who thirst and bow before His feet

Wave on wave of power abounds

Chains are broken, dead are raised

Hearts are healed and lost ones found

Place me now and anchor me

my place within Your symphony

Cause my heart to know my place

In Your grand opera of Grace,

As You breathe and send us forth

From this time before Your face.

What struck me in this image is that the woman who has made herself ready and been in a time of waiting, now has a mighty encounter with the wind of the Spirit and is not only turned to face forward but her garment and mindset are changed to apostolic (purple) and she also becomes part of the new sound that God is releasing in this hour. This woman is the corporate Bride of Christ, whose transformation into the treble clef indicates a new piece of music is about to begin. The musical notes which pour out from the belly of the treble clef are the individuals who form part of the corporate Bride; previously hidden and in waiting, they now burst forth much like the disciples from the upper room, after a mighty encounter and infilling of the Spirit. The call of the Bride is to be anchored in each one’s specific place upon the musical stave, in order for the full, clear sound of this piece of Heavenly music to be heard in the earth. Any confusion will result in a discordant sound being released, as notes are sounded out of time and place.

The word ‘stave’ also means ‘a strong stick, especially one that is used as a weapon’ and comes from the word ‘staff’, which is a symbol of office or authority. This piece of music, when all notes are properly placed, becomes a weapon carrying authority in God’s hand, as He uses Heaven’s sound to create and manifest His will in the earth. This is not so much about ‘doing’ as ‘being’. We are moving from the Church age to the Kingdom age and we minister out of who He has made us to be; who we are in Christ, rather than what we do; it’s about Christ in us being seen as opposed to us and our giftings being recognized. It’s not about ministry as much as Kingdom purposes being fulfilled. I am reminded of the stars accurately and precisely placed in the Heavens in their constellations.

Psa 19:1  To the chief musician. A Psalm of David. The heavens are recounting the glory of God, and the expanse proclaiming His handiwork. Psa 19:2  Day by day they pour forth speech, and night to night reveal knowledge. Psa 19:3  There is no speech, nor are there words where their voice is not heard.

The stars pour forth a form of speech or sound, but it is not heard by natural ears. As they remain anchored in their God-appointed positions, they recount the glory of God. In the same way, as you allow God to anchor you in His appointed position in the musical score, your surrendered, holy life releases a sound in the spiritual realm that contains great power – without one word coming out of your mouth. Each star on its own carries no message, but positioned within the constellations, a powerful message resounds and reveals the knowledge of God. One musical note on its own carries little meaning, but when placed in context with all the other notes exactly where God intends them to be, a glorious symphony of praise resounds throughout the earth.

One of the meanings of ‘stave’, when used as a verb is ‘to release (wine, liquor, etc.) by breaking the cask or barrel’. This music that we are to become a vital part of is Heaven’s best wine, formed from much crushing and maturing out of sight; the expression of the rich wine of His fierce love in a world where the wine has run out. Much like the woman who broke her alabaster box and the fragrance filled the whole house, this symphony poured forth from the Bride as the wind of the Spirit comes mightily upon her, will fill the whole earth with the fragrance of Christ. The powerful wind of the Spirit is for turning from the old towards the new, for infilling and transformation to an apostolic mindset, and then for carrying you to your appointed place on the stave. The X shaped anchor is interesting, as Tav, the last letter of the Hebrew alphabet was represented in ancient times by a pictograph shaped like an X. This final anchoring indicates a completed work in you. Jesus is the Alpha and the Omega; the Aleph and the Tav, and He who began a good work in you will bring it to completion in the Day of the Lord. This place on the stave is what all your preparation and training has been about; what all the previous chapters have shaped and formed you for. You are His workmanship, created in Christ Jesus for good works which God has prepared beforehand for you to walk in. Your position on the musical stave indicates exactly what God has made you to be. In Christ Jesus, your earthen vessel releases a beautiful rich sound as you fulfill the call for which Christ took hold of you. This is what you have been pressing toward, to take hold of. This is what all that refining has shaped you to be. This is your Tav, your swan song, your glorious part in the crescendo of Heaven’s work in the earth.

Imagine my amazement when the speaker for the prophetic gathering stood up and announced the Lord had instructed her to call forth the women of the South to be part of Heaven’s new sound! What a powerful confirmation of all I had seen by the Spirit.

Your time of waiting will roll over into a time of being transformed by the powerful encounter with the wind of Heaven. Ask Him to anchor you in your appointed position on the musical score. Prepare to be brought to the fullness of His place and purpose for you as you display the glory of God in the earth.