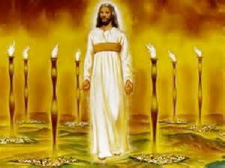 Tonight during the service at church, I saw Jesus enter the room with a large lampstand in His hands. He walked up to the front of the people and took our smaller lampstand away and placed the bigger lampstand there. His eyes were ablaze and He was brooding over the people as He stood there. I knew that He was desiring for them to surrender more of themselves to Him, and to abandon themselves to deeper prayer. A great intense season is coming upon the earth, and the church must begin to seek the Lord now, for the wisdom to walk through the months and years ahead. The Lord then proceeded to speak to us all in the meeting, and when I get time I will type out all that was said to us regarding the call to even more radical prayer. The Presence of the Lord was very strong and I wept in the pulpit as the burdens of the Lord\’s heart poured through mine. It is time to wake up ad to carry the Lord\’s burdens with Him in prayer for all the nations, and for our own.

Later, I had lain down to rest, and I was immediately back into the vision again. This time I saw the Lampstand and it was even bigger. It stood in the center of the city and oil was pumping out of it, much like water would spurt out of a water fountain. It just kept pumping out oil from it\’s bowls. It got so messy in that area that several people came closer and were angry at the mess it was making in the town, and they wanted me to remove it. They were screaming and shaking their fists at the Lampstand. Others complained about the oil getting into their clothes and staining it, and it was even getting into their homes and they had to keep mopping it up. They did not want it in the city either. The Lampstand kept pumping oil, and nothing they did slowed it down. People gathered to see the oil spurting everywhere. Soon people were arguing amongst themselves about what to do with the Lampstand. Then the Lampstand seemed to speed up, and the oil pumped faster out of the tops. It was pumping like a raging fountain and it began to fill the streets so that cars could not drive down the streets for fear of running off of the road. Many avoided the whole area entirely.

As I watched, I saw some that had gathered actually go up to the Lampstand and tried to reach into the oil stream to lay hold of the Lampstand. When they did this, they disappeared, and I don\’t know where they went, but each time they did it, the Lampstand grew in size. Soon, the streets were flooded with oil, and it began to rise up enough to flood homes, stores, basements, and even covered some low lying bridges. People even began to try to mob the Lampstand area angrily and demanded that it stop pumping. It was ruining everything and nothing escaped the oil. News spread of this Lampstand that pumped out oil, and other people from neighboring areas came to see what was happening, but when they drew near to the city, they too were overwhelmed by the flow of oil. The city officials began to sound their sirens to warn other cities to not come near their city for fear of major flooding spreading further out. This only drew more seekers and soon the news spread across the nation. TV stations flew above in their helicopters filming the Lampstand and it\’s ever pumping flow, and the deepening flood of oil spreading further and further out. Soon it was the talk of the world.

Eventually, I asked the Lord what the Lampstand was doing by pumping out so much oil. The Lord said to me, \”Look and see what the outcome shall be.\” All of a sudden, everything panned out further, and I saw that the city was actually in the middle of a great valley, and the valley looked like a big bowl, and it was being filled with oil slowly but methodically. Eventually, it filled up to the edge of the valley like a bowl would be filled, and the entire valley was so saturated and engulfed in the oil from the Lampstand that the people were literally swimming in it now. Many were not very happy about this oil messing up their plans and interrupting and consuming their lives. The Lord just watched and smiled, then when He was satisfied, He said, \”Enough,\” to the Lampstand, and it\’s pumping ceased. The valley was full of heavy oil, and then the Lord blew upon the valley, and the whole valley caught on fire, like an oil lamp being lit. I could hear weeping and gnashing of teeth, and groans and screams coming from the flames. After awhile, I could hear prayers and sobbing as the people finally began to pray in the fire. Then I heard singing, and then shouting, and then people praying loudly for more fire to come. Soon their prayers and the fire became one sound, a deafening roar.

The Lord then said, \”Now there is enough prayer to bring change to this nation.\” Then I saw the massive arm of the Lord come down and He picked up the valley like you would pick up a bowl, and He tipped it and poured out the bowl of oil onto the entire nation, and the whole nation began to be covered in that oil, and the oil burned as it spread everywhere. There was anger, and screams of surprise, and cursing, and some mockery, and also joy. Many different reactions were seen and heard in the pouring forth of the oil. And just like the city before it, the voices of the inhabitants of the nation were against the oil and fire too, but they could do nothing to stop the oil, so eventually many too were heard praying in the chaos and crying out to the Lord as it filled the nation. I was amazed as I watched the scenes unfold and as I watched the reactions of masses of people as they transitioned from surprise to anger, to surrender and then to devotion, and finally to deep prayer. Then it spread from the nation, out to other nations, till the whole earth was in chaos, and was heaving in the effects of the heavy oil and burning fire, and until they too were travailing in prayer all across the globe…….. – end.

The Lord is coming to find His People who are praying, and He will fill them with fresh oil; and the oil will not run out, nor will the flame of intercession go out day or night. He will fall upon whole cities and grip them in prayer, and he will raise up for Himself whole cities of prayer. His House will be finally overflowing with prayer for the nations of the earth. Those who have stood faithful in the Lord\’s tests, and who have labored unseen in prayer for a long time, will now be receiving bigger lampstands in this season, and they will see the desire of the nations come in. He is coming to fill His House, and He will fill it with Prayer, with His Glory, and with Holy Fire. It is time to become His Prayer Bowls, and to be ready to be poured out for all men. Great fiery intercessions are about to begin all across our nation as the Lord comes more fully in. It is Harvest Time.

Zechariah 9:14 And the Lord shall be seen over them and His arrow shall go forth as the lightning, and the Lord God will blow the trumpet and will go forth in the windstorms of the south. 15 The Lord of hosts shall defend and protect them; and they shall devour and they shall tread on [their fallen enemies] as on slingstones [that have missed their aim], and they shall drink [of victory] and be noisy and turbulent as from wine and become full like bowls [used to catch the sacrificial blood], like the corners of the [sacrificial] altar. 16 And the Lord their God will save them on that day as the flock of His people, for they shall be as the [precious] jewels of a crown, lifted high over and shining glitteringly upon His land.

Psalms 92:9 For behold, Your adversaries, O Lord, for behold, Your enemies shall perish; all the evildoers shall be scattered. 10 But my horn (emblem of excessive strength and stately grace) You have exalted like that of a wild ox; I am anointed with fresh oil.

Mark 11:17 And He taught and said to them, Is it not written, My house shall be called a house of prayer for all the nations? But you have turned it into a den of robbers.

Is Now the Time?